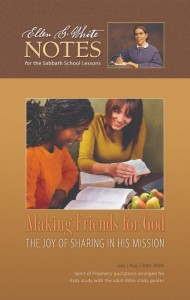 The ministry of Christ was in marked contrast to that of the Jewish elders. Their regard for tradition and formalism had destroyed all real freedom of thought or action. They lived in continual dread of defilement. To avoid contact with the “unclean,” they kept aloof, not only from the Gentiles, but from the majority of their own people, seeking neither to benefit them nor to win their friendship. By dwelling constantly on these matters, they had dwarfed their minds and narrowed the orbit of their lives. Their example encouraged egotism and intolerance among all classes of the people.

Jesus began the work of reformation by coming into close sympathy with humanity. While He showed the greatest reverence for the law of God, He rebuked the pretentious piety of the Pharisees, and tried to free the people from the senseless rules that bound them. He was seeking to break down the barriers which separated the different classes of society, that He might bring men together as children of one family. His attendance at the marriage feast was designed to be a step toward effecting this.