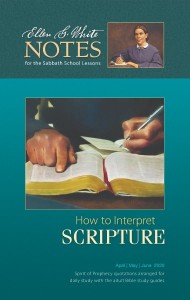 The banner of truth and religious liberty which these Reformers held aloft has in this last conflict been committed to us. The responsibility for this great gift rests with those whom God has blessed with a knowledge of His word. We are to receive God’s word as supreme authority. We must accept its truths for ourselves. And we can appreciate these truths only as we search them out by personal study. Then, as we make God’s word the guide of our lives, for us is answered the prayer of Christ: “Sanctify them through Thy truth: Thy word is truth.” John 17:17. The acknowledgment of the truth in word and deed is our confession of faith. Only thus can others know that we believe the Bible.

Those Reformers whose protest has given us the name Protestant felt that God had called them to give the gospel to the world, and in doing this they were ready to sacrifice their possessions, their liberty, and their lives. Are we in this last conflict of the great controversy as faithful to our trust as were the early Reformers to theirs?

In the face of persecution and death, the truth for that time was spread far and near. The word of God was carried to the people; all classes, high and low, rich and poor, learned and ignorant, studied it eagerly, and those who received the light became in their turn its messengers. In those days the truth was brought home to the people through the press. Luther’s pen was a power, and his writings, scattered broadcast, stirred the world. The same agencies are at our command, with facilities multiplied a hundredfold. Bibles, publications in many languages, setting forth the truth for this time, are at our hand and can be swiftly carried to all the world. We are to give the last warning of God to men, and what should be our earnestness in studying the Bible, and our zeal in spreading the light!