Lesson 6: For What Nation is There so Great?

Home/Sabbath School Notes/Lesson 6: For What Nation is There so Great?
Previous Next

Lesson 6: For What Nation is There so Great? 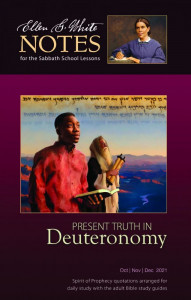 If they would keep His commandments, God promised to give them the finest of the wheat, and bring them honey out of the rock. With long life would He satisfy them, and show them His salvation.

Through disobedience to God, Adam and Eve had lost Eden, and because of sin the whole earth was cursed. But if God’s people followed His instruction, their land would be restored to fertility and beauty. God Himself gave them directions in regard to the culture of the soil, and they were to co-operate with Him in its restoration. Thus the whole land, under God’s control, would become an object lesson of spiritual truth. As in obedience to His natural laws the earth should produce its treasures, so in obedience to His moral law the hearts of the people were to reflect the attributes of His character. Even the heathen would recognize the superiority of those who served and worshiped the living God.