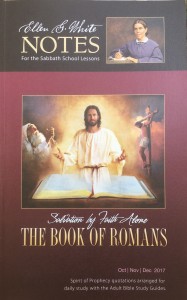 When God pardons the sinner, remits the punishment he deserves, and treats him as though he had not sinned, He receives him into divine favor, and justifies him through the merits of Christ’s righteousness. The sinner can be justified only through faith in the atonement made through God’s dear Son, who became a sacrifice for the sins of the guilty world. No one can be justified by any works of his own. He can be delivered from the guilt of sin, from the condemnation of the law, from the penalty of transgression, only by virtue of the suffering, death, and resurrection of Christ. Faith is the only condition upon which justification can be obtained, and faith includes not only belief but trust….

The faith that is unto salvation is not a casual faith, it is not the mere consent of the intellect, it is belief rooted in the heart, that embraces Christ as a personal Saviour…. When the soul lays hold upon Christ as the only hope of salvation, then genuine faith is manifested. This faith leads its possessor to place all the affections of the soul upon Christ; his understanding is under the control of the Holy Spirit, and his character is molded after the divine likeness. His faith is not a dead faith, but a faith that works by love, and leads him to behold the beauty of Christ, and to become assimilated to the divine character.