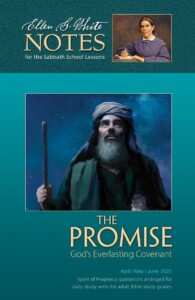 Sorrow filled heaven, as it was realized that man was lost, and that world which God had created was to be filled with mortals doomed to misery, sickness, and death, and there was no way of escape for the offender. The whole family of Adam must die. I saw the lovely Jesus and beheld an expression of sympathy and sorrow upon His countenance. Soon I saw Him approach the exceeding bright light which enshrouded the Father…  The anxiety of the angels seemed to be intense while Jesus was communing with His Father. Three times He was shut in by the glorious light about the Father, and the third time He came from the Father, His person could be seen. His countenance was calm, free from all perplexity and doubt, and shone with benevolence and loveliness, such as words cannot express. He then made known to the angelic host that a way of escape had been made for lost man. He told them that He had been pleading with His Father, and had offered to give His life a ransom, to take the sentence of death upon Himself, that through Him man might find pardon; that through the merits of His blood, and obedience to the law of God, they could have the favor of God, and be brought into the beautiful garden, and eat of the fruit of the tree of life.