Lesson 3 Sabbath: A Day of Freedom

Home/Sabbath School Notes/Lesson 3 Sabbath: A Day of Freedom
Previous Next

Lesson 3 Sabbath: A Day of Freedom 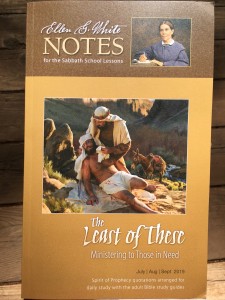 Christ, during His earthly ministry, emphasized the binding claims of the Sabbath; in all His teaching He showed reverence for the institution He Himself had given. In His days the Sabbath had become so perverted that its observance reflected the character of selfish and arbitrary men rather than the character of God. Christ set aside the false teaching by which those who claimed to know God had misrepresented Him. Although followed with merciless hostility by the rabbis, He did not even appear to conform to their requirements, but went straight forward keeping the Sabbath according to the law of God.

In unmistakable language He testified to His regard for the law of Jehovah. “Think not that I am come to destroy the law, or the prophets,” He said; “I am not come to destroy, but to fulfill. For verily I say unto you, Till heaven and earth pass, one jot or one tittle shall in no wise pass from the law, till all be fulfilled. Whosoever therefore shall break one of these least commandments, and shall teach men so, he shall be called the least in the kingdom of heaven: but whosoever shall do and teach them, the same shall be called great in the kingdom of heaven.” Matthew 5:17-19.