Lesson 13: Christ in the Crucible

Lesson 13: Christ in the Crucible 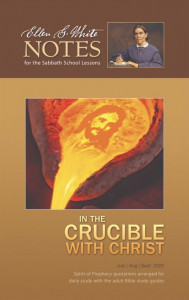 It was a being of wonderful power and glory that had set himself against God. Of Lucifer the Lord says, “Thou sealest up the sum, full of wisdom, and perfect in beauty.” Ezekiel 28:12. Lucifer had been the covering cherub. He had stood in the light of God’s presence. He had been the highest of all created beings, and had been foremost in revealing God’s purposes to the universe. After he had sinned, his power to deceive was the more deceptive, and the unveiling of his character was the more difficult, because of the exalted position he had held with the Father.

God could have destroyed Satan and his sympathizers as easily as one can cast a pebble to the earth; but He did not do this. Rebellion was not to be overcome by force. Compelling power is found only under Satan’s government. The Lord’s principles are not of this order. His authority rests upon goodness, mercy, and love; and the presentation of these principles is the means to be used. God’s government is moral, and truth and love are to be the prevailing power.